4 Strange Nevada Laws That Could Land You in Jail

4 Strange Nevada Laws That Could Land You in Jail 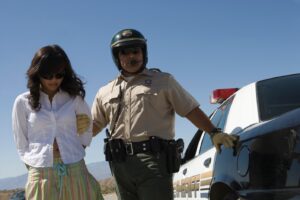 The city of Las Vegas is one of the most unique travel destinations in the world and naturally, the city has accumulated some unique laws through the years. If you live in Las Vegas and plan to visit on vacation, learn about some of the laws and charges found in the state.

In some cases, the charges could be added to other charges, increasing the amount of bail you have and creating possible longer sentences. Learn about the strange laws and ways to avoid them in the state of Nevada.

Fremont Street is the famous pedestrian walkway in downtown Las Vegas. Officially referred to as the Fremont Street Experience Pedestrian Mall, lawmakers have gone out of their way to provide visitors with a unique experience every time they come to visit the area. Many of the laws may seem silly, but they are there to help move the flow of people and prevent hassles.

One of the laws that stands out is the hula hooping law. You cannot use a hula hoop on Fremont Street that is over four feet in diameter. The law is aimed at the street performers who often entertain and fill the streets in an attempt to make money. Clearly, the talented hula hoopers were taking up too much space.

The hula hoop law is also included with another mandate that prohibits sitting on laying down on the ground on Fremont Street. Keeping guests moving up and down the street is one of the main goals and the laws will help with that.

In many cases, you would probably get away with a warning about your hula hoop activities, but pushing the limits could lead you to jail, where you may have to pay a fine or suffer from misdemeanor charges.

Despite all the tourist shops on Fremont Street, you are also not allowed to use a shopping cart on the Pedestrian Mall. This is not the only odd shopping cart law in the state. Shopping cart theft and manipulation are taken seriously. The unlawful painting of a shopping cart could land you a misdemeanor charge and even time in jail.

The small charges that include the manipulation of a shopping cart are most likely added to the theft of property. The laws are in-tact due to the homeless population looking for something to carry their belongings in.

Many businesses have lost carts over the years and laws were passed to prevent theft. Painting a cart could cover up the original owner and make it harder to determine where the cart belonged to in the first place. In short, just leave the shopping carts at the businesses where you got them.

Nevada has some of the more strict driving laws in the country. Whether you fly in and rent a car or take a road trip to Las Vegas, you should be aware of the crimes associated with driving. While many states would issue a civil ticket for driving crimes, the state of Nevada resorts to misdemeanors. A misdemeanor could land you in jail and require a bail bond for your release.

Another area with strict traffic laws is that of funeral processions. If you are driving in a procession, you get extra protections, including the ability to go past red lights and stop signs without stopping. If you come across a funeral procession in progress, then you have to be aware of respectful of the process.

You could get ticketed or charged with a misdemeanor if you cut off a funeral procession or break apart the line of cars. Along with the head hearse, watch for flags and headlights during the day to notice a funeral procession. The cars may also have their hazard lights blinking for further indication.

Las Vegas is known for its famous catchphrase “What Happens in Vegas, Stays in Vegas,” but the words you use could go against you. One of the older laws in the state prohibits profane, vile, or obscene language. Essentially, you cannot go up and down the Las Vegas strip cursing up a storm. The law covers public settings like streets and alleys.

While the law is older and rarely used, police officers may add the charges along with infractions like public intoxication. The addition of an obscene language charge could result in a higher bail amount and more charges overall. In most situations, you would have to go on a tirade to really make an officer charge you with the crime.

Either way, being aware of the law will help you control your actions and prevent running into extra trouble.

If you’ve been charged with any of these crimes or other charges, then contact us at All Star Bail Bonds to handle all your bail needs. We can guide you step by step through the process to ensure your bail is covered and you can get released from jail.